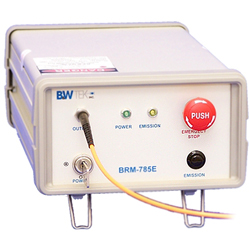 The CleanLaze® laser series is capable of maintaining a linewidth of less than 0.03nm (15GHz) in single transverse mode operation at 785nm. The core part of this laser is a high-power broad-stripe laser diode with its output spectrum narrowed and stabilized using novel laser cavity technology. Conventional external cavity lasers are both delicate and require high maintenance costs due to the inclusion of external reflective dispersive elements, resulting in a long cavity length. In the CleanLaze®, the wavelength selective element is an integral part of the laser diode through a hybrid integration process, resulting in a compact device which is stable against environmental changes (temperature, vibration, humidity, etc.). The utilization of a broad-stripe laser diode guarantees a low cost module while delivering higher output power than its DFB and DBR counterparts. The wavelength selective element filters out unwanted spectral sidelobes from the broad-stripe laser diode and locks its output wavelength to the filter’s central wavelength.

/wp-content/uploads/2012/06/Datasheet_THUMB_CleanLaze_NON-OEM.jpg 46
Please fill out the form to download the PDF.
Click the link at the bottom after submitting.