Components of a Raman Spectrometer

There are three primary components to any Raman spectrometer: an excitation source, a sampling apparatus, and a detector. While these three components have come in varying forms over the years, modern Raman instrumentation has developed around using a laser as the excitation source, a spectrometer for the detector, and either a microscope or a fiber optic probe for the sampling apparatus.

Since Raman spectroscopy is predicated on the ability to measure a shift in wavelength (or frequency) it is imperative that a monochromatic excitation source be employed. While a laser is typically the best excitation source, not all lasers are suitable for Raman spectroscopy, so it is essential that the laser frequency is extremely stable and does not mode hop, since this will cause errors in the Raman shift. It is also essential to utilize a clean, narrow bandwidth laser because the quality of the Raman peaks is directly affected by the sharpness and stability of the excitation light source.

The final consideration when deciding which laser to use for a Raman spectrometer is the wavelength. From the previous section, it is clear that the shorter the wavelength, the more powerful the Raman signal. However, as was already stated, this is not the only consideration especially when dealing with organic molecules. Most organic molecules will tend to fluoresce when excited by high energy (short wavelength) photons. Although fluorescence is typically considered to be a low light level process, it can still overwhelm the signal in the Raman spectrum as shown in Figure R-5. This is because the Raman effect is comprised of a very small fraction (about 1 in 107) of the incident photons. As a result, visible lasers are typically only used for inorganic materials such as carbon nanotubes. 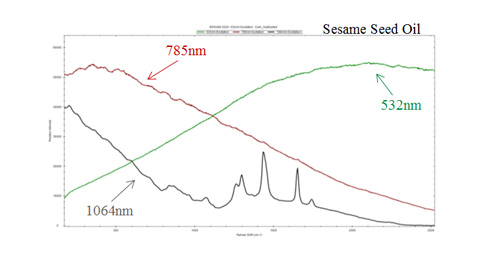 For organic molecules it is important to shift the laser wavelength into the near infrared to minimize fluorescence while not exceeding CCD spectral detection limits. Due to their availability and the fact that they allow for the maximum fluorescence reduction without the sacrifice of spectral range or resolution, 785nm diode lasers have become the industry standard. For highly colored samples and samples that suffer from strong fluorescence interference, a 1064 nm laser offers the best fluorescence suppression. For increased sensitivity with inorganic molecules, a 532nm laser is the best choice because fluorescence is no longer an issue. Read more about selecting the best laser wavelength for your application

As previously discussed, Raman scattering is very weak and therefore tends to require long integration times in order to collect enough photons to measure a discernible signal. This makes the use of a thermoelectrically-cooled spectrometer a requirement in order to reduce the dark noise. For very low concentrations or weak Raman scatters, it may be necessary to use a back-thinned CCD to further increase the sensitivity of the spectrometer. By etching the detector to only a few microns thick, the probability of an electron being reabsorbed as it travels through the detector based on Beer’s law is greatly reduced. This increases the sensitivity of the detector from a maximum quantum efficiency of 35% to greater than 90%.

Due to the highly selective nature of Raman spectra, they may contain peaks which are fairly close together. Depending on the application, it may be necessary to resolve these closely spaced peaks, which requires the use of a high resolution spectrometer. Typically standard spectrometer configurations are for 532nm and 785nm laser excitation wavelengths, with custom excitation wavelengths also available. These spectrometers can offer a variety of configurations specially designed for wide spectral range and high resolution. Typical spectral ranges are available from as low as 65cm-1 (filter dependent) to as high as 4000cm-1, with a spectral resolution as fine as 3cm-1.

When measuring the sample, there is no more effective method of directing the laser light to the sample, collecting the Raman scatter, and directing it to a spectrometer than a fiber optic probe.

A Raman probe must be capable of directing and focusing the monochromatic excitation source (typically a laser) to the sample, collecting the scattered light and then directing it to the spectrometer. Figure R-6 shows a typical design for a Raman probe.

Since a pure signal is extremely important to Raman spectroscopy, a narrow band-pass filter is placed in the optical path of the excitation source before it reaches the sample. It is also important to note that since the Raman effect is extremely weak, the signal must be collected at a 0o angle normal to the sample. This causes interference from Rayleigh scattering and therefore it is essential to filter the collected signal through the use of a long pass filter before it is directed to the spectrometer.

The flexibility afforded by fiber optics not only allows for the probe to be taken to a solid sample, but also allows it to be immersed in liquids or slurries in both laboratory and process environments (for real time kinetic measurements). It can also be connected to microscopes, cuvette holders, as well as a plethora of sampling accessories.

Read about proper care and maintenance of fiber optic probes

Browse our line of Raman systems.

Read about some applications of Raman: https://bwtek.com/category/laboratory-raman-app-notes

See the use of Raman for different applications: https://bwtek.com/videos-applications/