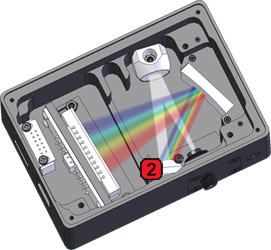 The diffraction grating of a spectrometer determines the wavelength range and partially determines the optical resolution that the spectrometer will achieve. Choosing the correct grating is a key factor in optimizing your spectrometer for the best spectral results in your application. Gratings will influence your optical resolution and the maximum efficiency for a specific wavelength range. The grating can be described in two parts: the groove frequency and the blaze angle, which are further explained in the sections below.

There are two types of diffraction gratings: ruled gratings and holographic gratings. Ruled gratings are created by etching a large number of parallel grooves onto the surface of a substrate, then coating it with a highly reflective material. Holographic gratings, on the other hand, are created by interfering two UV beams to create a sinusoidal index of refraction variation in a piece of optical glass. This process results in a much more uniform spectral response, but a much lower overall efficiency.

While ruled gratings are the simplest and least expensive gratings to manufacture, they exhibit much more stray light. This is due to surface imperfections and other errors in the groove period. Thus, for spectroscopic applications (such as UV spectroscopy) where the detector response is poorer and the optics are suffering more loss, holographic gratings are generally selected to improve the stray light performance of the spectrometer. Another advantage of holographic gratings is that they are easily formed on concave surfaces, allowing them to function as both the dispersive element and focusing optic at the same time.

When the required wavelength coverage is broad, i.e. λmax > 2λmin, optical signals in wavelengths from different diffraction orders may end up at the same spatial position on the detector plane, which will become evident once we take a look at the grating equation. In this case, a linear variable filter (LVF) is required to eliminate any unwanted higher order contributions, or perform “order sorting”.

For fixed grating spectrometers, it can be shown that the angular dispersion from the grating is described by

By taking into account the focal length (F) of the focusing mirror and by assuming the small angle approximation, equation 2-1 can be rewritten as

Based on equation 2-3, it is clear that the maximum spectral range of a spectrometer is determined by the detector length (LD), the groove density (1/d) and the focal length (F).

where N is the total number of grooves on the diffraction grating. This is consistent with transform limit theory which states that the smallest resolvable unit of any transform is inversely proportional to the number of samples. Generally, the resolving power of the grating is much higher than the overall resolving power of the spectrometer, showing that the dispersion is only one of many factors in determining the overall spectral resolution.

It should also be noted that the longest wavelength that will be diffracted by a grating is 2d, which places an upper limit on the spectral range of the grating. For near-infrared (NIR) applications, this long wavelength limitation may restrict the maximum groove density allowed for your spectrometer.

As a grating diffracts incident polychromatic light, it does not do so with uniform efficiency. The overall shape of the diffraction curve is determined mainly by the groove facet angle, otherwise known as the blaze angle. Using this property, it is possible to calculate which blaze angle will correspond to which peak efficiency; this is called the blaze wavelength. This concept is illustrated in figure 2-1, which compares three different 150g/mm gratings blazed at 500nm, 1250nm & 2000nm.