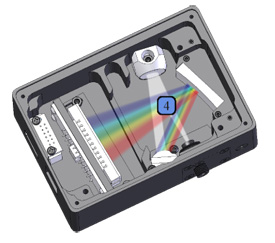 As stated in Part 1: The Slit, a spectrometer is an imaging system which maps a plurality of monochromatic images of the entrance slit onto the detector plane. In the past 3 sections, we discussed the three key configurable components of the spectrometer: the slit, the grating, and the detector. In this section, we will discuss how these different components work together with different optical components to form a complete system. This system is typically referred to as the spectrograph, or optical bench. While there are many different possible optical bench configurations, the three most common types are the crossed Czerny-Turner, unfolded Czerny-Turner, and concave holographic spectrographs (shown in Figures 4-1, 4-2, and 4-3 respectively).

The crossed Czerny-Turner configuration consists of two concave mirrors and one plano diffraction grating, as illustrated in Figure 4-1. The focal length of mirror 1 is selected such that it collimates the light emitted from the entrance slit and directs the collimated beam of light onto the diffraction grating. Once the light has been diffracted and separated into its chromatic components, mirror 2 is then used to focus the dispersed light from the grating onto the detector plane.

The crossed Czerny-Turner configuration offers a compact and flexible spectrograph design. For a diffraction grating with given angular dispersion value, the focal length of the two mirrors can be designed to provide various linear dispersion values, which in turn determines the spectral coverage for a given detector, sensing length and resolution of the system. By optimizing the geometry of the configuration, the crossed Czerny-Turner spectrograph may provide a flattened spectral field and good coma correction. However, due to its off-axis geometry, the Czerny-Turner optical bench exhibits a large image aberration, which may broaden the image width of the entrance slit by a few tens of microns. Thus, the Czerny-Turner optical bench is mainly used for low to medium resolution spectrometers. Although this design is not intended for two dimensional imaging, using aspheric mirrors (such as toroidal mirrors) instead of spherical mirrors can provide a certain degree of correction to the spherical aberration and astigmatism.

To minimize image aberrations, the Czerny-Turner optical bench is generally designed with an f-number of >3, which in turn places a limit on its throughput. The f-number of an optical system expresses the diameter of the entrance pupil in terms of its effective focal length. The f-number is defined as f/# = f/D, where f is the focal length of the collection optic and D is the diameter of the element. The f-number is used to characterize the light gathering power of the optical system. The relation of the f-number with another important optical concept, Numerical Aperture (NA), is that: f/# = 1/(2•NA), where the numerical aperture of an optical system is a dimensionless number that characterizes the range of angles over which the system can accept or emit light.

The relatively large f/# of Czerny-Turner optical benches, in comparison to a typical multimode fibers (NA ≈ 0.22), can cause a fairly high level of stray light in the optical bench. One simple and cost-effective way to mitigate this issue is by unfolding the optical bench as shown in Figure 4-2 below. This allows for the insertion of “beam blocks” into the optical path, greatly reducing the stray light and, as a result, the optical noise in the system. This issue is not as damaging in the visible and NIR regions where there is an abundance of signal and higher quantum efficiencies, but it can be a problem for dealing with medium to low light level UV applications. This makes the unfolded Czerny-Turner spectrograph ideal for UV applications that require a compact form factor.

The third most common optical bench is based on an aberration corrected concave holographic grating (CHG). Here, the concave grating is used both as the dispersive and focusing element, which in turn means that the number of optical elements is reduced. This increases throughput and efficiency of the spectrograph, thus making it higher in throughput and more rugged. The holographic grating technology permits correction of all image aberrations present in spherical, mirror based Czerny-Turner spectrometers at one wavelength, with good mitigation over a wide wavelength range.

In comparison with a ruled grating, the holographic grating presents up to over a 10x reduction in stray light, which helps to minimize the interferences due to unwanted light. A ruled diffraction grating is produced by a ruling engine that cuts grooves into the coating layer on the grating substrate (typically glass coated with a thin reflective layer) using a diamond tipped tool. A holographic diffraction grating is produced using a photolithographic technique that utilizes a holographic interference pattern. Ruled diffraction gratings, by the nature of the manufacturing process, cannot be produced without defects, which may include periodic errors, spacing errors and surface irregularities. All of these contribute to increased stray light and ghosting (false spectral lines caused by periodic errors). The optical technique used to manufacture holographic diffraction gratings does not produce periodic errors, spacing errors or surface irregularities. This means that holographic gratings have significantly reduced stray light (typically 5-10x lower stray light compared to ruled gratings) and removed ghosts completely.