I Want a New Drug: All About New Psychoactive Substances (NPS) - B&W Tek

I Want a New Drug: All About New Psychoactive Substances (NPS)

NPS is a term in the fields of forensics, law enforcement, and toxicology that stands for “new psychoactive substances”. The United National Office on Drug and Crime (UNODC) defines NPS as “substances of abuse, either in a pure form or a preparation, that are not controlled by the 1961 Single Convention on Narcotic Drugs or the 1971 Convention on Psychotropic Substances, but which may pose a public health threat”.1 NPS typically have chemical similarities to controlled drugs, but have been synthesized to be structurally unique as to not yet be controlled by any regulating body. Since psychoactive substances have been synthesized in laboratories for decades, the “new” in NPS refers to how recently a substance has become available on the drug market.

It is a challenge for law enforcement and global regulating bodies to keep up with the emergence of these new drugs. Recently, NPS have emerged as a global health concern. Although they are seen as a “legal high” and perhaps thought of as safe due to their non-controlled status, the purity, toxicity, long-term effects of these compounds are rarely known. They can potentially have severe side effects including seizures, aggression and acute psychosis.1

NPS can encompass a wide variety of drug classes, including stimulants, hallucinogens, opioids, sedatives, and synthetic cannabinoids. The chemistry of these substances is even wider and continuously changes as the demand for these drugs grows. Based on chemical structure, NPS groups include aminoindanes, phenethylamines, cathinones, tryptamines, and piperazines.

The TacticID® line of handheld Raman spectrometers from B&W Tek can aid law enforcement in identifying NPS in the field. Figure 1 shows the Raman spectra of various NPS. Since a Raman spectrum acts as a unique chemical fingerprint based on molecular structure, we can create a library of these materials to identify suspected NPS. In addition, 1064 nm systems like the TacticID®-1064, TacticID®-1064 ST, and TacticID® Mobile and can be used to reduce the strong natural fluorescence that some NPS generate when excited with a 785 nm laser. Figure 2 shows the Raman spectrum of 4-bromomethcathinone HCl collected with both 785 and 1064 nm excitation wavelengths. The spectrum collected with a 1064 nm laser mitigates the natural fluorescence generated with the 785 nm laser. 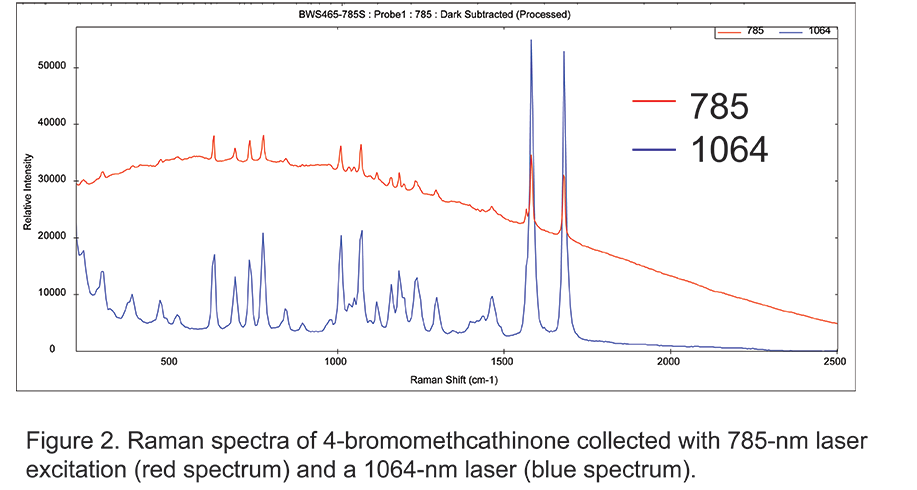 2. Discrimination of synthetic cannabinoids in herbal matrices and of cathinone derivatives by portable and laboratory-based Raman spectroscopy – ScienceDirect

3. Detection and phase I metabolism of the 7‐azaindole‐derived synthetic cannabinoid 5F‐AB‐P7AICA including a preliminary pharmacokinetic evaluation – Drug Testing and Analysis – Wiley Online Library

This entry was posted in Uncategorized, Handheld Raman. Bookmark the permalink.