Raman Spectroscopy and Its Use in Monitoring Olive Oil Adulteration

June 1st is National Olive Day! To honor the occasion, we thought we would highlight some of the ways that Raman spectroscopy has been used to monitor olive oil adulteration.

Extra-virgin olive oil (EVOO) is the highest-quality olive oil on the market due to its purity and rich flavor; it is cold-pressed from the olive itself and not treated with any chemical or heat process. EVOO typically costs 30-40% more than lesser-quality olive oils, which can be a mix of cold-pressed oil and oil that has been refined through industrial processes to remove impurities. However, it has been widely reported in the media that an estimated 80% of the EVOO sold on the market is adulterated or fraudulent. Adulteration of EVOO can be with a lighter olive oil, or it can be with cheaper edible oils like corn oil, canola oil, sunflower oil, or hazelnut oil that are then artificially colored. While consuming adulterated olive oil is typically not hazardous to one’s health, the rampant adulteration of commercial EVOOs greatly affects the stability of the international olive oil market and decreases consumers’ confidence.

Part of the reason for the pervasiveness of adulteration is that it is difficult to detect falsely-labeled EVOO. In response to the prevalence of adulterated EVOO, the European Union established tests for taste and aroma for different grades of olive oil, but those can be subjective within the olive oil-tasting community. Laboratory techniques have been developed for this detection, but are usually HPLC-based, which makes field detection difficult. Alternative methods to establish adulteration at points of entry are needed to detect adulterated EVOO before it enters the market. Raman spectroscopy has been used to detect and quantify adulteration in EVOO. 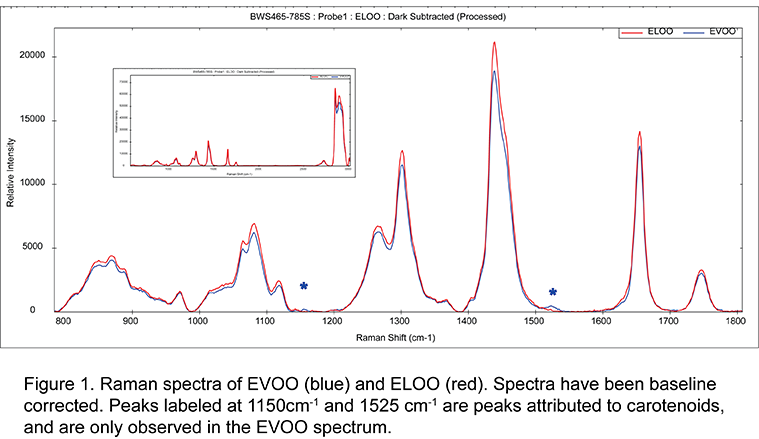 Some olive oil products labeled as EVOO may contain light olive oil, or extra light olive oil (ELOO). Figure 1 shows spectra of pure EVOO and pure ELOO collected with an i-Raman Plus 785 system. The spectra are quite similar, but there are two peaks present in the EVOO spectrum that are not present in the ELOO spectrum. Peaks labeled in Figure 1 at 1150 cm-1 and 1525 cm-1 are attributed to the C-C and C=C stretching of carotenoids, respectively, and may be used to differentiate and potentially quantify contamination in EVOOs. Figure 2 shows a PCA model of EVOO samples vs. ELOO samples, where the samples can clearly be separated. 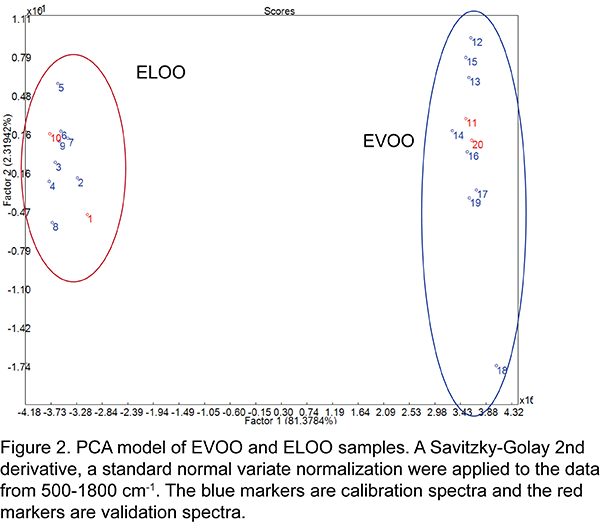 For more information about Raman applications for adulteration and counterfeiting, visit https://bwtek.com/applications/counterfeit/.

This entry was posted in Portable Raman. Bookmark the permalink.