The History of National Science Day

National Science Day is celebrated on February 28th because it corresponds to the date that Sir Chandrasekhara Venkata Raman observed the “Raman effect” in 1928 at the laboratory of the Indian Association for the Cultivation of Science (IACS) in Kolkata. He would win the Nobel Prize in physics in 1930 for his discovery. Let’s learn more about Raman and his experiment, observations, and legacy.

C.V. Raman was born in 1888 to a father who was a professor of physics and a mother from a scholarly family. Raman was educated entirely in India and received BA and MA degrees in physics by 1907. With few job prospects in the sciences at the time, he joined the Indian Finance Department as an accountant and moved to Kolkata. In Kolkata, he continued his optics research at the IACS outside of normal work hours. Working primarily alone, he published 27 papers in ten years and helped to advance the reputation of the nascent IACS. Throughout his lecturing and research, he remained a full-time civil servant until the age of 29, when he accepted a professorship at Kolkata University.

In 1921 Raman traveled to London to meet with fellow physicists J.J. Thompson and Lord Rutherford, who were already familiar with his work. But it was not until his sea voyage home from this trip that he became fascinated with the phenomenon of light scattering. Unable to accept Lord Rayleigh’s theory that the color of the ocean was blue merely because it was a reflection of the sky, he searched for another explanation during the journey on the Mediterranean Sea. Armed with a prism and a small spectroscope, he was able to hypothesize that the water molecules could scatter light in the same way that air molecules can. When he reached land, he sent a letter to Nature right away.2 Upon return to his laboratory in Kolkata, he began working on experiments to study the effects of light scattering on liquids and solids.

Experiments in light scattering were difficult to carry out in the 1920s. As the advent of the laser wouldn’t be for another few decades, sunlight was predominantly used as the light source in initial experiments, and visual observations of color were relied on instead of precise measurements with analytical tools. In 1923, Raman and his research assistant K.S. Krishnan observed that when sunlight was passed through a color filter to isolate violet light and was incident on a liquid sample, the light was scattered off of the sample. They used more color filters to filter out the violet light, and observed a very weak green light that was scattered from the liquid (Figure 1). This observed scattered light, which was a different color than incident light, became known as Raman scattering. 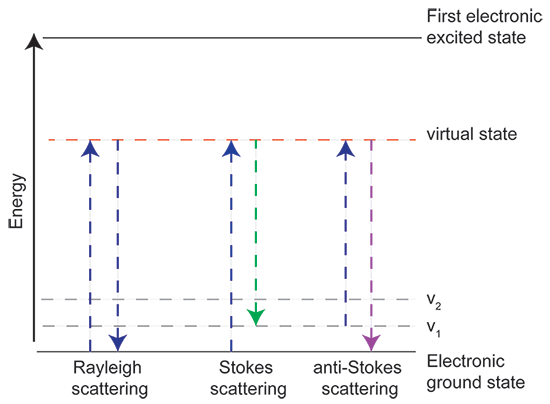 Given the observed weakness of the scattered signal Raman realized they needed a more intense light source. Mercury arc lamps eventually provided an even more intense source than concentrated sunlight. On February 28th, 1928, after previously relying on visual observations, Raman and Krishnan recorded the first Raman spectrum; using a quartz spectrograph that Raman built, they were finally able to measure the precise wavelengths of the incident light and the Raman scattering. Their quantitative results were published a month later in the Indian Journal of Physics, of which Raman was the founder and first editor.3

Raman spectroscopy quickly became an important analytical technique for chemists. The molecular “fingerprint” that a Raman spectrum provides can be used for qualitative analysis of a substance or mixture, while the intensity of the spectral bands are quantitatively proportional to the concentration of the substance in a matrix. The effect also intrigued physicists, who used the discovery to inform more about quantum theory. By 1935, Raman scattering was the subject of over 700 scientific papers!4

Still, Raman spectroscopy was not without its experimental challenges. An exposure time to collect a Raman spectrum could take multiple days to collect, and thus had to be performed in a dark room by knowledgeable scientists. Raman spectroscopy soon began to take a backseat to the innovations that were made in infrared spectroscopy after World War II. It wasn’t until the invention of the laser in the 1960s and later developments in computing and data processing that Raman spectroscopy had a revival in the scientific community. Recent advances in fiber optics and microelectronics have allowed for the manufacturing of portable and handheld Raman systems, paving the way for Raman spectroscopy to have an impact outside of the laboratory.

Today, applications of Raman spectroscopy span from fundamental research to solving solutions that improve our daily lives. Common applications for Raman that have been facilitated by portable and handheld Raman spectroscopy are as varied as art conservation, cancer diagnosis, and screening for illicit drugs. Furthermore, the observation of the phenomenon of surface-enhanced Raman scattering (SERS), expanded our understanding of nanoscience and sensing technology. SERS is able to overcome the limitations of the weak efficiency of the Raman effect. Since it was determined in the late 1990s that SERS has the potential to reach single-molecule detection levels, the number of SERS peer-reviewed publications has grown exponentially.

We have not yet reached the bounds of what Raman spectroscopy in its many forms can achieve. As our knowledge expands every day, C.V. Raman’s legacy and contribution to science is honored with the celebration of National Science Day in India and the scientific community worldwide.