The Importance of Relative Intensity Correction of Raman Data

As portable Raman technology becomes more prevalent especially among pharmaceutical businesses and within defense and security fields, so too does the need for cross-system analysis.  Spectra that are used to create a library or model on one system are often then transferred for use on another system that uses a different spectrometer.  These spectrometers have their own, unique spectral sensitivities, which affects the relative peak intensities of the spectra they collect.  These variations are the result of the quantum efficiency of the spectrometer’s detector and the spectrometer’s optical design and individual components (e.g. lenses, gratings, and probes). In order to account for this variation, each spectrometer must be corrected for their own relative intensity.  Let us discuss the importance of correcting for relative intensity of Raman data.

In some experiments, the ratio between two peak heights is very important.  Spectra of the same substances may have different relative peak intensities when comparing between two spectrometers, thereby affecting the ratios between peaks.  Correcting for relative intensity corrects the differences in peak ratios.  Figure 1 shows two spectra of cyclohexane collected on the same instrument.  One of the spectra is relative intensity corrected (red) and the other is not (blue).  As one can see, the peak heights are different between the two and, upon closer inspection, the ratio between 801 cm-1 and 1020 cm-1 are different between the two spectra.  Using a spectral math function (I801 cm-1 /I1020 cm-1), you get a ratio of 4.45 for the uncorrected spectrum and 4.00 for the corrected version.  The difference between these ratios is quite significant.  It could lead to a false result for an experiment in which the ratio between these two peaks is important.

What materials can be used for a relative intensity correction and how does the correction work?

Relative intensity correction can be obtained when a certified material is analyzed with a Raman spectrometer.  Originally, white light lamps (such as tungsten or tungsten-halogen lamps) were used to correct for the relative intensity of a Raman spectrometer.  The spectral output of the lamps was calibrated to a traceable irradiation source.  In turn, the lamp was then used to calibrate the Raman spectrometer.  However, there were some drawbacks with the lamps.  First, the calibration of the lamps had a limited lifetime and often needed to be sent out for recalibration.  Second, the lamps themselves were too big for most Raman experiments and posed their own difficulties in trying to interface them with the Raman experiment.  Therefore, alternatives were desperately sought. 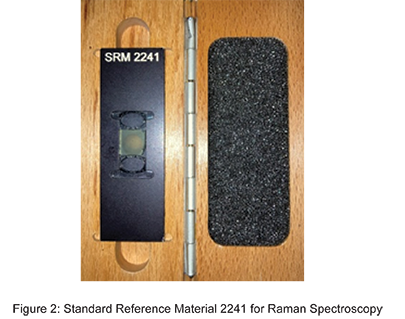 In cooperation with the ASTM Subcommittee of Raman Spectroscopy, the National Institute of Standards and Technology developed a suite of standard reference materials (SRMs). These STMs are a series of glasses that are luminescent with Raman laser irradiation (Figure 2).  The luminescent spectrum can be fit by an analytical expression (which represents the true shape of the glass) in order to create a spectrum that is free from relative interference from the spectrometer.  BWSpec software’s Relative Intensity Correction tool can create a “Ratio3” file by dividing the analytical expression (i.e. the true shape) of the glass by its uncorrected spectrum.  This Ratio3 correction file can be applied either automatically to spectra during acquisition or retroactively to previously acquired spectra. As an example, Figure 3 shows the Raman spectrum of the SRM 2241 standard measured on an i-Raman® Plus 785nm Raman system without intensity correction.  Figure 4 shows the same spectrum when it has been intensity corrected with the Ratio3 file.  In the end, the relative-intensity correction yields Raman spectra that have a comparable response across all instruments using that specific laser (in this case 785nm). 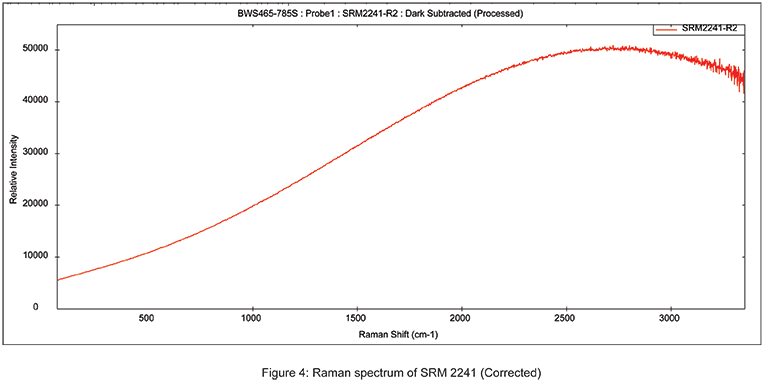 Relative intensity correction can be used effectively to deal with etaloning effect that may be present in the optical system. Etaloning occurs when there is constructive / destructive interference between two parallel surfaces, which results in modulations of spectral intensity. This is common in interference filters used in Raman probes, and back-thinned CCD sensors (working in the NIR region).  Figure 5 is an uncorrected spectrum of a lapis lazuli stone (a deep blue semi-precious stone) collected on an i-Raman® Plus 785 nm Raman system.  As you can see, there is a fringe pattern that runs along the spectrum.  That pattern is the result of etaloning, not real peaks in the spectrum.  Figure 6 shows the same spectrum following relative intensity correction, where the pattern is removed and the spectrum looks a lot clearer.

Does the relative intensity correction only need to take into account the system hardware or does the specific fiber-optic probe need to be taken into account as well?

Finally, when thinking about the relative intensity correction of a Raman system, a very important part of the system that must be taken into consideration is the sampling system.  Part of that sampling system is the fiber optic probe, and each probe has its own set of optics.  Just like the spectrometer, this set of optics affect the spectrum’s relative intensity.  Therefore, any correction to the relative intensity will include the specific probe that is connected to the spectrometer at that time.  If you want to use multiple probes on the same system, then individual Ratio Files will need to be created for each probe.  B&W Tek makes probes for a variety of different purposes: the lab-grade Raman Trigger Probe, a process-grade Industrial Raman Probe (good for demanding manufacturing environments), as well as custom probes to fit your application.  It is important to remember to use the correct ratio file for the probe currently in use.

This entry was posted in Portable Raman. Bookmark the permalink.