Part 3a: The Detector 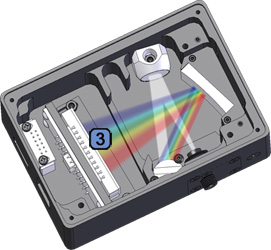 In the previous sections, we discussed the importance of the entrance slit and the diffraction grating in forming a spectral image of the incident light in the image plane. In traditional spectrometer (monochrometer) designs, a second slit is placed in the image plane, known as the exit slit. The exit slit is typically the same size as the entrance slit since the entrance slit width is one of the limiting factors on the spectrometer’s resolution (as was shown in Part 1). In this configuration, a single element detector is placed behind the exit slit and the grating is rotated to scan the spectral image across the slit, and therefore measure the intensity of the light as a function of wavelength.

In modern spectrometers, CCD and linear detector arrays have facilitated the development of “fixed grating” spectrometers. As the incident light strikes the individual pixels across the CCD, each pixel represents a portion of the spectrum that the electronics can then translate and display with a given intensity using software. This advancement has allowed for spectrometers to be constructed without the need for moving parts, and therefore greatly reduce the size and power consumption. The use of compact multi-element detectors has allowed for a new class of low cost, compact spectrometers to be developed: commonly referred to as “miniature spectrometers.”

While photodetectors can be characterized in many different ways, the most important differentiator is the detector material. The two most common semiconductor materials used in miniature spectrometers are Si and InGaAs. It is critical to choose the proper detector material when designing a spectrometer because the bandgap energy (Egap) of the semiconductor determines the upper wavelength limit (λmax) that can be detected by the following relationship

where h is Plank’s constant and c is the speed of light. The product of Plank’s constant and the speed of light can be expressed as 1240 eV•nm or 1.24 eV•µm to simplify the conversion from energy to wavelength. For example, the bandgap energy of Si is 1.11eV which corresponds to maximum wavelength of 1117.117nm. InGaAs, on the other hand, is an alloy created by mixing InAs and GaAs, which have a bandgap of 0.36eV and 1.43eV respectively, and depending on the ratio of In and Ga the bandgap energy can be tuned in between those two values. However, due to a variety of factors, not all ratios of In and Ga are easily fabricated, therefore 1.7µm (or 0.73eV) has become the standard configuration for InGaAs detector arrays. It is also possible to use extended InGaAs arrays which can detect out to 2.2µm or 2.6µm, but these detectors are much more expensive and are much nosier than traditional InGaAs detectors.

CCD technology allows for small pixel size (~14µm) detectors to be constructed because it eliminates the need for direct readout circuitry from each individual pixel. This is accomplished by transferring the charge from one pixel to another, allowing for all of the information along the array to be read out from a single pixel. CCDs can be constructed very inexpensively which makes them an ideal choice for most miniature spectrometers, but they do have two drawbacks. First, the gate structure on the front of the CCD can cause the incident light to scatter and therefore not be absorbed. Second, CCDs need to have a relatively large P-Si substrate to facilitate low cost production, however, this also limits the efficiency of the detector (especially at shorter wavelengths) due to absorption through the Player.

To mitigate both of these issues in spectroscopy applications where very high sensitivity is needed, BT-CCDs are ideal. BT-CCDs are made by etching the P-Si substrate of the CCD to a thickness of approximately 10µm. This process greatly reduces the amount of absorption and increases the overall efficiency of the detector. This process also allows the detector to be illuminated from the back side (P-Si region) which eliminates the effects from the gate structure on the surface of the detector. Figure 3-2 below shows a typical comparison of the quantum efficiency between a traditional front illuminated CCD and a back illuminated BT-CCD.

While there are distinct advantages to the use of BT-CCDs in spectroscopy, there are also two major drawbacks that should be noted. First, this process greatly increases the cost of production, and second (since the detector is so thin ) there can be an etaloning effect caused from reflections off the front and back surfaces of the detector. The etaloning phenomena associated with BT-CCDs can be mitigated by a process known as deep depletion, but once again this adds additional cost to the production process.

PDA detectors are more traditional linear detectors which consist of a set of individual photodiodes that are arranged in a linear fashion using CMOS technology. These detectors, while not having the small pixel size and high sensitivity, have several advantages over CCD and BT-CCD detectors. First, the lack of charge transfer eliminates the need for a gate structure on the front surface of the detector, and greatly increases the readout speed. The second advantage of PDA detectors is that the well depth is much higher than the well depth of a CCD; a typical PDA detector well depth is ~156,000,000e- as compared to ~65,000e- for a standard CCD. The larger well depth of PDA detectors causes them to have a very large dynamic range ~50,000:1 as well as an extremely linear response. These properties make PDAs ideal for applications where it is necessary to detect small changes in large signals, such as LED monitoring.